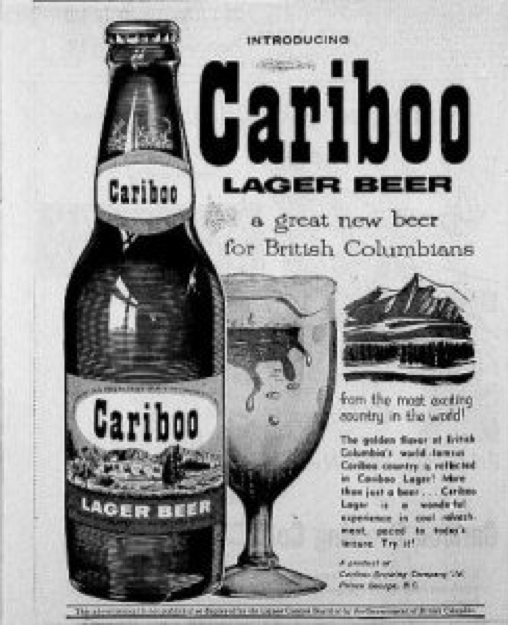 On July 16th, 1956 Prince George “investors” were invited “to share in the profits of Central and Northern BC’s first brewery.”

The total start-up cost of the Caribou Brewing Company Ltd. project was initially estimated at $550,000 and ended up costing $1.2 million. Cariboo Lager would be marketed in the Yukon, throughout the BC north and south to Kamloops and the Okanagan.

2017 – the 60th anniversary of brewing on the banks of the Nechako in Prince George – the words of the first brewery’s president, Donald Lauder of Vancouver, echo back through the decades: “We are more firmly convinced than ever that the company’s choice of Prince George as its home was its soundest step.” He called the enterprise “a new Cariboo Trek, a trek of industry.”

Those sentiments ring true today, but 60 years ago they would quickly turn to dust. Sadly, for many of the first investors it would be a trek into the financial wilderness and over the next decade they would discover that the invitation to “share the profits” was only that, an invitation.

In fact, the brewery would face recurring financial hurdles and it was not until 1991, when the brewery was purchased by its current owner Kazuko Komatsu, that it really started to claim its place as a stable, job-sustaining, quality-focused, community-oriented cornerstone in the Prince George business community.

By late 1961 Caribou Brewing was bankrupt and its stockholders were informed that the company had been losing money from the day the doors opened. Into the void stepped Ben Ginter’s Tartan Brewing which bought the plant and equipment at public auction in January 1962 for a bargain basement price of $150,000.

By 1964 Tartan was being characterized as “one of the more important primary industries in the Central Interior.” Paaps – “a brew of strength and character for those who like a little more body in their drink” – was introduced.

But, Ginter’s temperament and his combative nature would ultimately take their toll and the Ginter years would be remembered as some of the most fractious for the struggling brewery.

The first signs of dark clouds eclipsing Ben’s venture into brewing came in the fall of 1965 when  a beer strike dried up most of the province including Prince George even though Ben was still in operation and running three shifts. Local beer outlets like the Legion had spurned Tartan and, for some, the reason was Ben himself. A man-on-the-street poll by the Citizen got feedback like this: “Ginter has enough money; why should I help him make more?”

By 1969, Ginter was fighting with Victoria accusing Attorney General Robert Bonner and the Liquor Control Board of discriminating against Tartan. By 1969, Ben was in a full-blown snit threatening to sell his $450,000 Prince George mansion and even sell the brewery.

He bitterly complained that the local market accounted for just one per cent of his sales. “Damn rotten envy. That seems to be the big factor. I get amazing and wonderful support from the people on the Lower Mainland. Yet hotels in this area are dead as far as our product is concerned. I cannot any longer subsidize or carry a payroll here in the North Country.”

By November 1976 the financial noose was tightening on Tartan. Ben was $8.4 million in debt against $2.7 million in assets. The brewery, along with other Ginter assets, was in receivership and the operation was at a standstill because of a labour dispute and a BC Federation of Labour “hot” edict.

It took until February, 1978 to iron things out. That’s when the BC Supreme Court approved the sale of the brewery to Prince George Breweries Ltd. By June the new company – headed by PG businessman Bob Naismith and his partner Nelson, was was ready to start brewing with the help of a $490,000 federal grant and a BC Development Corp mortgage guarantee.

In the 1980’s you needed a score card to keep track of the ownership changes.  In 1981, Prince George Breweries morphed into Old Fort Brewing after being purchased by a group from Edmonton headed by Ron Hodgson.  In 1985, control of the Brewery was passed to Ledcor also out of Edmonton.  They changed the name to Pacific Western Brewing and proceeded to wrap it into a company on the Vancouver Stock Exchange.  This company eventually also acquired Potter Distilling Company, Granville Island Brewing and Calona Wines. Ledcor sold this amalgamation to a group of investors from the Vancouver Stock Exchange who in turn sold it to a Swiss holding company.

The brewery was then sold to Kazuko Komatsu’s Pacific Pinnacle Investments on Feb. 5th, 1991. She had become aware of the brewery and its potential when arranging for the export of Dragon Dry to Japan and Hong Kong through her exporting company Kowa Canada. By August of that year the City of Prince George had endorsed Pacific Real Draft as the city’s “Official Beer.”

The rest is history. Kazuko’s tenure as the seventh and longest-standing owner of the brewery surpassed 25 years in 2016. In that time, she has accomplished what Ben Ginter thought he deserved, but could never achieve … she has earned the trust and support of the Prince George community.

Driven by the call to community service enshrined in her ancestral Samurai heritage, Kazuko saw in PWB an opportunity to apply her values and use those qualities to create a strong brand and an international reputation.

Under Kazuko’s stewardship the achievements and the accolades have been unparalleled. The first Asian Canadian to take a leadership role in the brewing industry, she has established her reputation and staked the brewery’s name on her unwavering quality standards. She is also extremely proud to be a job creator in BC.

Kazuko continues to make use of quality and innovation. Because she would not compromise on quality PWB became the first North American brewery to obtain the ISO quality manufacturing standard in 2004.

“That was followed by another first,” says Tom Leboe, the brewery’s acting plant manager.  “The brewery was the first in Canada to be awarded a gold medal at the Industry International Awards in Munich Germany.”

Over the course of Kazuko’s ownership of the brewery, she has sought out markets for PWB products throughout BC, Alberta, Japan, the U.S., China, Argentina, France and Russia while also growing the employee base to about 70 and supporting a wide range of community initiatives.

“Kazuko Komatsu and Pacific Western Brewery are very good corporate citizens,” Tom notes. “We make significant donations to the Spirit of the North Healthcare Foundation, UNBC and the College of New Caledonia as well as many major sporting events.”

PWB sponsored the 2015 Canada Winter Games in the city and supports a number of charities including the Prince George Foundation, the three Prince George Rotary Clubs and others.

Kazuko has a passion for environmental projects. She developed a program to replant BC forests devastated by the effects of the Mountain Pine Beetle, and has committed to planting one million trees by 2020. This initiative supports the community as well as lumber and silviculture industries in BC. The Water Shoreline Clean-up and salmon stock rehabilitation projects round out a few of the past environmental projects PWB has supported.

“We are a secondary manufacturer not tied to the cyclical forest industry,” Tom says. “We are proud to contribute to our community and generate economic spinoff for several local suppliers.”

PWB may be classified as a mid-sized brewery, but it is nimble in comparison to global competitors like Labatt or Molson. It’s Kazuko’s commitment to continually increase awareness of the quality of PWB that has allowed her to earn respect for the brand.

In 2013, PWB installed a 10 hectolitre (HL) small batch pilot brewing system in 2013 that allows the brewery to develop new leading edge recipes and offer one-off beers and seasonal releases. The equipment complements PWB’s existing production system that is responsible for the brewery’s entire product lineup with annual production in excess of 150,000 HL.

In 2016, Kazuko decided to make a beer solely with ingredients from the province we call home. “Cariboo Springs Lager not only supports hard working BC farmers and families that make our craft possible, but it also utilizes ingredients from their craft.

“Pacific Western has always represented the strong history of BC brewing around the world. Now, we are taking a stand with our agricultural neighbours,” Kazuko says.